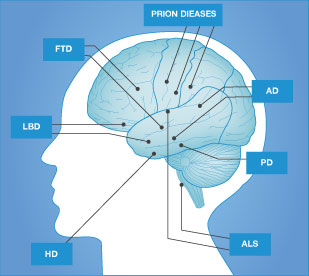 For AD, the beta amyloid (Aβ) peptide is the major component of extracellular deposits of senile plaques, and an abnormally hyperphosphorylated Tau (a microtubule-associated protein) consists of the intracellular deposits called neurofibrillary tangles. Aβ is produced and controlled exclusively by three membrane-bound secretases, including α-, β-, and γ- secretases (1-4), with great potential to become the first disease-modifying treatments for AD. Glycogen synthase kinase-3 (GSK-3) is a central modulator of the wingless-type murine-mammary tumour virus integration site (Wnt) pathway and plays a central role in physiological and pathological hyperphosphorylatioin of Tau (5). In addition to amyloid plaques and neurofibrillary tangles, aberrant neuronal death and extensive neuritic and synaptic degeneration due to apoptosis are a common characteristic in AD (6).

For PD, the neuropathological hallmarks include progressive neurodegeneration in defined regions of the brain and the presence of distinct intracellular inclusion bodies such as Lewy bodies and Lewy neuritis, which has been also found in other neurodegenerative diseases such as Down’s syndrome (7), AD (8), and neurodegeneration with brain iron accumulation type I (9). These aggregates contain abundant ubiquitinated and phosphorylated pre-synaptic protein called α-synuclein (10). Missense mutations, gene multiplications and polymorphisms in the α-synuclein gene have been found directly contributed to sporadic and rare familial cases of PD.

A common theme shared by AD and PD as well many other neurodegenerative disorders is the abnormal folding or clearance of cytotoxic protein aggregates. Molecular chaperones mediate protein folding/re-folding and are intimately associated with pathways of protein degradation such as ubiquitin-proteasome system and the autophagy-lysosomal pathway that are involved in removing irreversibly misfolded proteins. Small molecule inhibitors of molecular chaperones Hsp40, 70 and 90 have been found efficiently to protect neurons in neurodegenerative disorders such as PD, AD, amyotrophic lateral sclerosis (ALS) and polyQ disease (11).

Abcepta offers high-quality, in-house developed antibodies for the elucidation of neuropathological hallmarks and molecular pathways revolving around the key enzymes and molecular chaperones mentioned above. In addition, Abcepta offers antibodies for the study of emerging mechanisms including altered protein metabolism and mitochondrial function along with cellular stress induced by reactive-oxygen species (ROS) or glutamatergic excitotoxicity.